Invented Tradition and Translated Practices: the Career of Tai Chi in China and the West

This thesis takes the primary contemporary icons of Chinese tradition –the popular practice of Tai Chi‐and subjects its career in both China and the West, to a series of critical interrogations focusing on three main moments; the invention and (re)imagination of tradition, the practice’s migration from China to the West, and its translation by its English practitioners. During the Imperial period, when Tai Chi was defined primarily as a martial art, it was the focus of a sustained struggle between its official deployment as part of the military machine and its practice by clandestine societies and insurgent movement. It was simultaneously incorporated into the push to modernization and promoted as a part of an unbroken cultural legacy that defined the uniqueness of Chineseness in various forms during Republican China, Mao’s era and Post‐Mao era. The thesis also looks at the key figures and the process of institutionalization and indigenisation as the practice generated its own national professional associations and competitions in England since 1940s. Based on ethnographic research in the Midlands, the thesis explores the contending understandings of Tai Chi among its English practitioners. It explores the ways in which British instructors locate themselves within an ‘authentic’ tradition by way of a latent lineage system. This allows them to maintain their own personal commitment to Tai Chi as a martial art conflicts while working with the market drive for mass participation based on concepts of relaxation and alternative therapy and medicine. The ethnographic research also explores the ways that students in Tai Chi classes translate it into an indoors practices with an outdoors imagination, and as a bodily discipline with a spiritual basis, and how they construct their understanding of this spiritual dimension by drawing on polysemic interpretations of oriental conceptions such as Yin, Yang and Qi rather than the standardised references to Taoism in the public representations. 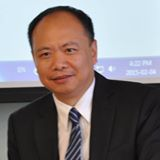 « Let’s Get This Tai Chi Ball Rolling » Wushu: a Culture of Adversaries