Australian Participation Rates in Tai Chi Chuan and Qigong: Where is Everyone?

In the March, 2017 edition of the Tai Chi Association of Australia newsletter I wrote about the benefits of tai chi chuan for mental health and commented on published survey data from the USA by Dr. Romy Lauche* and colleagues (2016) which highlighted differences in U.S. participation rates between yoga and tai chi. At the time I noted that similar rates on participation for tai chi in Australia were difficult to obtain as the Australian Bureau of Statistics (ABS), in its Participation in Sport and Physical Activity report of 2012, grouped participation data for “Tai Chi” under the category of “Martial Arts” together with data for other martial arts such as kungfu, karate and taekwondo etc., whereas yoga was given its own distinct category for participation data. My point was that it would be helpful for the Australian tai chi community to have easier access to this information so that we can assess where we are now and consider how to best promote tai chi’s physical and mental health benefits into the future.

Recapping the results of Dr. Lauche and colleagues’ (2016) paper, it was estimated from the 2012 U.S. National Health Interview Survey of about 35,000 participants, that about 7 million people (≈3%) in the U.S., of a population of about 240 million, had practised tai chi at least once in their lifetime, and about 2.6 million (≈1%) had done so in the previous 12 months. The estimate of people who had practiced tai chi in the previous 12 months in 2012, showed only a slight increase (≈100,000 participants) from the estimate of 2002, compared to the larger increase for the 12-month participation rate for yoga which rose from an estimated 10 million in 2002 to 21 million in 2012 (an increase of ≈11 million participants). The authors suggested that a more aggressive marketing approach to publicly promoting yoga in the U.S. was a possible explanation for its success. The data also showed that compared to non-tai chi users, tai chi participants in the U.S. were more likely to be female and older than 30 years of age, and that younger age ranges were generally more represented in yoga research studies, compared with older age ranges in tai chi research. Those interested in other characteristics of tai chi and qigong users are referred to Dr. Lauche and colleagues’ (2016) paper.

I am now pleased to say that… 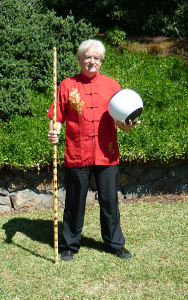 Brian Corless is a (recently retired) Clinical Psychologist and now full-time Tai Chi practitioner on the South Coast of NSW. He trains in Tai Yi Taijiquan with Sifu Wang Yunkuo in Sydney.